Living in either Sydney or Melbourne is a question that pops up in most migrants or even a lot of Australian locals minds when deciding which city to call home. They are two largest cities in Australia of a similar size and population, drawing migrants from all over the world. I have (to a large extent)been happily living in Sydney for the last three and a half years. However there are days where I ponder how different or maybe better my life would have been had I gone to Melbourne. My reason for moving to Sydney was purely because work drove me here. I didn’t make a definitive choice of picking one city over the other. However in helping future movers to either city decide, or even myself once I decide to ‘settle down’ in life, I have made a list of advantage that each city offers over the other. Which of those advantages are more meaningful or of high priority to you would help you decide which city to move in.

(I’m basing this list based on my experience of living in Sydney, and my frequent visits to Melbourne and hearing from friends of their experiences living there)

Advantages of Sydney over Melbourne:

That’s all the advantages I can think of for Sydney. Now on to Melbourne.

Advantages of Melbourne over Sydney:

That’s all the advantages of Melbourne that I could think of over Sydney. On balance living in either city is not vastly different from the other, but each of the advantages mentioned above can tilt the balance towards the favour of one city.

Impressive mural I found in the backstreets of Newtown, Sydney 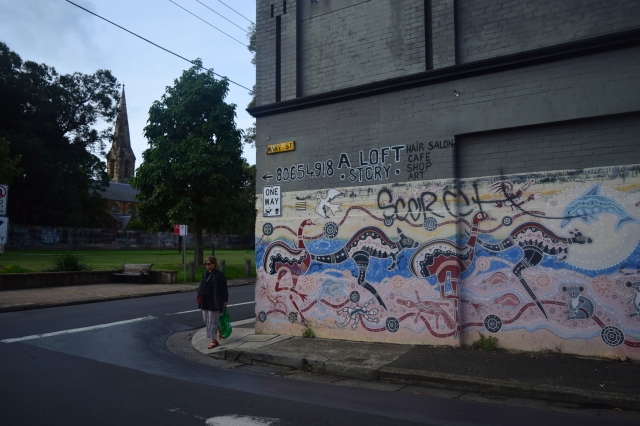 So I don’t often write on my blog (as evidenced by my three post history) but thought I’d write this one to get my creative juices flowing again and also as a bit of an informational post.

I’ve been living in Australia for slightly over a year now and one of the several things that I’ve had to get used to, and which catches you unexpectedly is the Australian lingo. The degree of ‘Australian-ness’ people use in their speech varies a lot among the different demographics. Generally the ‘older rural dwelling and (dare I say) lower economic class of people’ speak the most Australian and the younger urban dwelling ones speak the least Australian. I would say quite a few of the latter group don’t speak Australian at all and speak a more Americanised English. However barring this minority you are very likely to encounter some Australian lingo when speaking with locals. From my experience of living in the big cities in Australia (Brisbane, Sydney and Melbourne) and interacting with regular city working Australians I am providing a list of words I regularly encounter that people from other English-speaking parts of the world will most likely not have heard of and will definitely catch someone off-guard when heard the first time. Some them are quite easy to figure out as they are just abbreviations of regular words (a key feature of Australian English), while others are not so obvious. Here is the list in alphabetical order:

bikie – a person who rides motorcycles as part of a gang.

flat-white – a less milkier version of a latte. It’s probably the most served coffee in any cafe in Australia.

heaps – a lot. For eg: Thanks heaps; I have heaps of work to do

ocker – someone who speaks in an extremely Australian way and can sound a bit unsophisticated. An ocker can be from any economic class and usually tend to be Australians who’ve been here for many generations of Anglo origins.

pokies – gambling slot machines. These are found in many pubs in Australia and a bit of a social worry for the gambling addicts it creates.

schooner – a beer glass slightly smaller than a pint

woop woop – any place in the middle of nowhere

There are a few more that I’ve come across but these are the most common ones that I’ve heard being used.

Looking forward to the album

Song that got you into a genre

While listening to music on youtube today in an effort to rekindle my fondness of classic rock, one of the songs that I added to my playlist was ‘Over the Hills and Far Away’ by Led Zeppelin. Upon listening to that song a slightly delayed reminder was sent to my brain saying that this was the track that actually got me into classic rock (i.e. timeless rock music of the 60s, 70s). Prior to that the only classic rock tracks that I had heard were ‘Bohemian Rhapsody’, ‘Stairway to Heaven’ and ‘Another Brick in the Wall’. While I did enjoy those tracks when I first heard them as a 12 year old, I only thought of them at the time as stand out epic songs that were written by a few geniuses in music. I never really thought much at the time to explore the catalogue of these bands or to delve more into that type of music. A slight fast forward to a year or so later as a 13/14 year old I was heavily into the music of 90s rock bands such as Nirvana, Pearl Jam, Oasis, Alice in Chains as well as some early 2000’s stuff that was current at the time, like the White Stripes, Audioslave, Incubus, Queens of the Stone Age. I was quite engrossed in listening to that type of music during that time and even picked up learning to play the guitar at the time so that I could reproduce the songs of those bands. [I also happened to be listening to other rock music like Guns n Roses and Metallica during this time, as well as crappy nu-metal music like Korn and Limp Bizkit, a fad of the time]. However it wasn’t until two years later as a 16 year old that I started getting into classic rock. It started when I first  heard the track ‘Over the Hills and Far Away’ through either browsing online forums relating to playing guitar (that was thing I was doing at the time) or over internet radio, the exact source which I don’t perfectly remember now. But when I first heard  the song I was quite intrigued and fascinated by it. It had a very interesting acoustic guitar opening line and catchy guitar riffs and a sweet solo. The only other Led Zeppelin song I heard prior to that was Stairway to Heaven (which I had already known to be a masterpiece). The discovery of this new and amazing track by the same band that written Stairway to Heaven piqued my interest in them and led me to start exploring their vast discography, right from ‘Led Zeppelin I’ to through ‘In Through the Out Door’. This is how my fascination with Led Zeppelin began. Rather soon after I started going down the road of exploring the other great bands of that era (Pink Floyd, Jimi Hendrix, Cream, The Doors, The Who, Black Sabbath, Deep Purple, Rush, Queen, even the Beatles whose music I had barely heard before). Thus began my fascination with classic rock. It all started with the aforementioned Led Zeppelin track.

To anyone reading my page I would love to know which song or band got you into a particular genre of music, be it classic rock or any other genre.

This is my first post on my new blog, created as a space to let my creativity and writing flow. I initially intended this post to be about my move to Australia, where I moved to only about a few months back. However prior to creating this first post I decided to browse around WordPress a bit to check the list of blogs that would interest me. Well….that wasn’t the best idea. That particular train of thought resulted in me scrolling through thousands of blog pages closely linked to my interest areas (music, photography, films, sci-fi, economics, etc.). Browsing through these endless streams of bogs started to make feel a little overwhelmed with the amount information that was being presented in front of me and that I was trying to absorb. And this was only from one hour of browsing potential follow-worthy blogs on WordPress. I hadn’t even logged into my facebook, youtube, gmail, linkedin, twitter [insert other wide-userbase social media website]. Just thinking about that brought about a full blown feeling of being over-whelmed. It made me realise that we have so much information available to us at a click of a button/press of thumb that just trying to fathom the range of information and the diversity of information available would make anyone feel over-whelmed and confused. This wasn’t a problem people faced less than 12 years ago when availability of information and the presence of social media was nowhere as immense as it is today. And this isn’t a problem just faced by the first world (as people living in developed countries like to say), but in any country where people have access to the internet and IT equipment.

I guess what I’m trying to point at is with the ease and convenience of so much information available to us, which wasn’t the case as late as a decade ago, comes the problem of trying to sort through the clutter of this vast range and diversity of information. It’s a problem and task which all of us living in the 21st century have to learn to cope and deal with.

That’s all folks for my first post people! Sorry for the abrupt ending.